Atlanta area USG institutions stood out in national rankings with Georgia Institute of Technology ranked #10 in the nation and the University of Georgia ranked 16th in the best public universities category. Georgia State University ranked as the nation’s No. 2 most innovative university in the nation, as well as No. 2 for best undergraduate teaching. Georgia Gwinnett College received the top ranking among southern regional colleges for ethnic diversity and #3 in innovation.

Complete rankings on all colleges and universities can be viewed at the U.S. News & World Report’s ranking site. 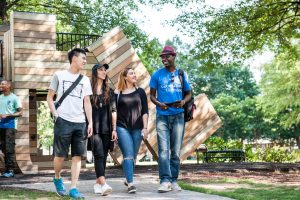 Agnes Scott College Athletics has officially entered into a partnership agreement with the Atlanta Dream of the Women's National Basketball Association (WNBA) as announced on Saturday afternoon, April 24, 2021.

"We are excited the Atlanta Dream have chosen Agnes Scott as their home and welcome them to campus, and to the greater Decatur community," said Agnes Scott director of athletics Markesha M. Henderson. "This collaboration provides an opportunity to elevate women's sports on all levels and is just the starting point for what I see as a future growth for both of our organizations."

The partnership has been in the works for the better part of three years, but the Dream's commitment to speaking out about equity and justice initiatives aligned perfectly with the vision Agnes Scott's new athletic director has for the department moving forward.

Georgia Tech’s Technology Square – one of the nation’s premier innovation districts and a leader in research and economic development – will host the Association of University Research Parks (AURP) 2019 International Conference.

“Georgia Tech is proud to host AURP’s 2019 International Conference,” said Chaouki Abdallah, executive vice president for research. “Tech Square is a testament to what is possible when higher education, government, business and the community work together. As the Southeast’s premier innovation district, Tech Square promotes a community of innovation, education and intelligent exchange.”

The University of Georgia has received a national Award of Excellence from the University Economic Development Association for its work in rural Georgia to save a local hospital from closing and to improve medical service for community residents.

“It is truly an honor to be selected for this national award by a group of our peers,” said UGA President Jere W. Morehead. “This is well-deserved recognition for our public service and outreach faculty and staff, who fulfill this university’s land-grant and sea-grant mission by addressing critical issues across the state.”